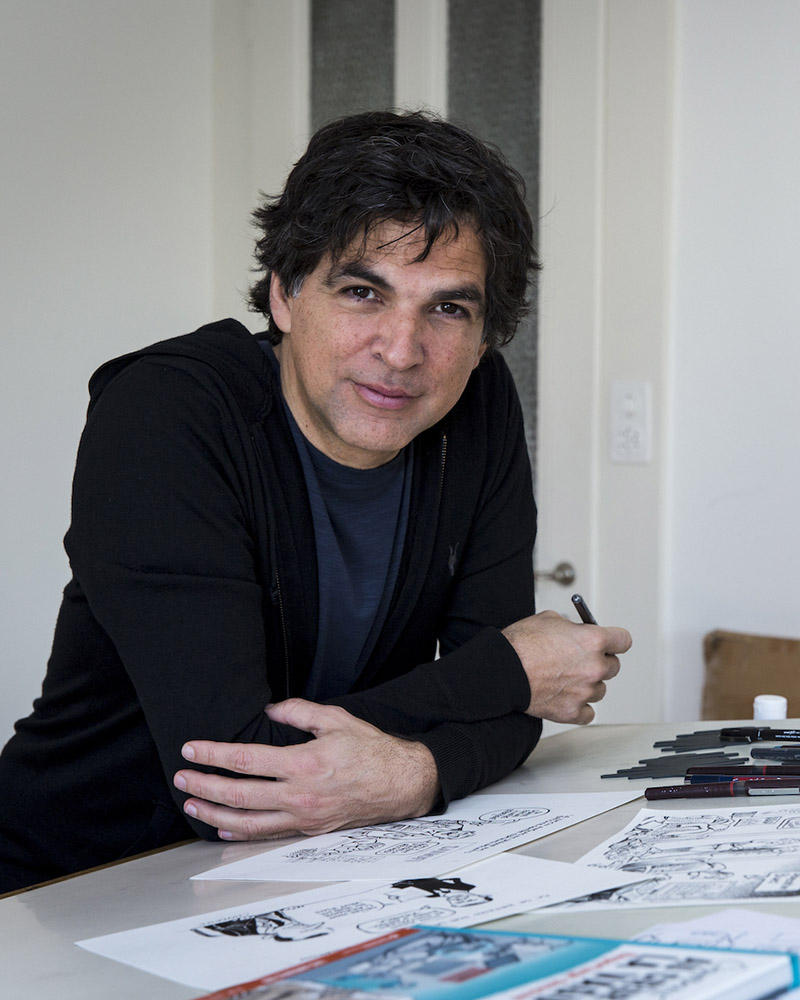 Mr. Chappatte was born in 1967 in Pakistan to a Lebanese-born mother and a Swiss father. He was raised in Singapore and Geneva, and lived in New York and Los Angeles. He is now based in Geneva with his wife and their three sons.

Patrick Chappatte is an editorial cartoonist working for The Boston Globe (USA), Der Spiegel (Germany), le Canard enchaîné (France), Le Temps and NZZ am Sonntag. (Switzerland). For 20 years, he was a cartoonist for the International Herald Tribune and The New York Times.

He is also a pioneer of graphic journalism, or comics journalism, and the promoter of collaborative projects promoting cartooning as a tool of dialogue all over the world.

Chappatte started drawing for the International Herald Tribune in 2001, and transitioned to The New York Times in 2013. His work was featured on the NYT website, on its social media and in its international print editions, as well as the NYT Chinese and Spanish websites. In June 2019, weeks after it published a controversial cartoon by a syndicated cartoonist, the newspaper decided to terminate all political cartoons. This decision inspired an essay by Chappatte that gained worldwide attention, and a TED Talk. It led to the publication of the book “This is the end”, foreworded by Nobel laureate Joseph Stiglitz.

Earlier in his career, Chappatte contributed to The New York Times Book Review and created a comic strip for Newsweek International called “Rob the Cybernaut.”

He received three times (2011, 2015 and 2018) the Overseas Press Club of America’s Best Cartoon Award (formerly Thomas Nast Award) for his work on international affairs – the only non-American to have won this prize.
–
Along his career, Chappatte has developed comics journalism in print, on the web and on TV. Stories include the war in Gaza (2009), the slums of Nairobi (2010), gang violence in Central America (2012), k-pop in South Korea (2013) and the dark side of Silicon Valley (2019). In 2016, with the help of his wife the journalist Anne-Frédérique Widmann, he created “Inside Death Row”, a five-part graphic journalism series for The New York Times – the first time the NYT published this form of graphic journalism.

This work came from a larger project by Chappatte and Widmann aimed at fostering a conversation on capital punishment: “Windows on Death Row”, an art exhibition bringing together works from U.S. editorial cartoonists and contributions by death row inmates, who were invited to illustrate the reality of isolation. For this project, the couple talked to more than 20 prisoners and interviewed a dozen of them in four maximum-security prisons around the country. After its Los Angeles opening in 2015, the exhibition toured the U.S. for two years.

–
Since 2003, Chappatte has collaborated with editorial cartoonists in conflict-ridden countries with the goal of promoting dialogue through cartooning. These projects, called “Crossed Pens” focused on Serbia, Ivory Coast, Lebanon, Kenya, Guatemala and Mexico. He described this work in another TED talk in 2010.

Chappatte is the president of  Geneva-based “Freedom Cartoonists Foundation” (previously “Cartooning for Peace” Foundation, inspired by Kofi Annan and Jean Plantu). Nobel Peace Laureate Kofi Annan was the organization’s honorary chairman. Every two years, the Swiss foundation awards an international prize recognizing a cartoonist for both his talent and his courage. In September 2016, it organized a Beethoven symphony in cartoons in Geneva concert hall.